Cy Twombly ‘Leda and the Swan’ crayon, pencil and oil on canvas 1962 at the MOMA.

It was time to make a quick getaway to see a few selected exhibits in New York for inspiration and a new perspective.  With only two days to spare my art buddy, Trish Berube and I, hopped the Acela from Boston to New York on a whirlwind visit that turned out to be the perfect ‘day at the office’ for artists.  Although we stood out like colorful sherpas landing from Mars in a sea of New Yorkers perfectly dressed in their black attire we managed to pull it off without a hitch.  There were many occasions when we were ‘shsssed’ for unexpected bursts of exclamations and laughter which is to be expected while experiencing profound art pieces.

Picasso at the MOMA.

First stop was the Museum of Modern Art for ‘old times sake’.  Trish worked there for several years and needed to visit some of her favorite paintings that she’d grown fond of during her tenure.  There are so many well known pieces of art  here like colorful, painterly masterpieces by Matisse to Dorothea Rockburn’s geometric designs on paper.

With the goal in mind to visit two museums each day we left the MOMA for the Upper East Side to visit the Vasily Kandinsky: From Blaue Reiter to the Bauhaus, 1910-1925 exhibit at the Neue Gallerie.  This is an extraordinary exhibit of several large, colorful paintings by Kandinsky that show his love of color, composition and musical inspiration.  There is a book published by the Neue Gallerie that catalogs the exhibit with high quality reproductions.   The Neue Gallerie is one of my favorite spots in New York as houses an incredible collection of Germanic arts and crafts from the turn of the twentieth century all housed within a beautifully restored building located at 1048 Fifth Avenue, at 86th Street and named after the famous Neue Gallerie in Vienna.

Time for a break at the Cafe Sabarsky inside the museum where there’s plenty of european style pastries and coffees.  It’s like taking a break in a traditional Viennese cafe. 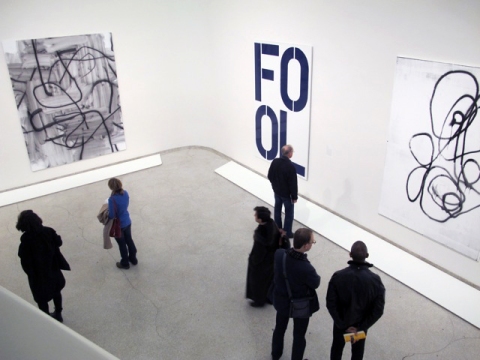 Christopher Wool at the Guggenheim.

For our second day it was on to the Guggenheim Museum to see the special exhibit by Christopher Wool .  Although I’m not as familiar with this artist’s work I’ve always enjoyed his pieces when I’ve come across them.  I was struck by how complimentary his work integrated with New York, the design of the Guggenhiem architecture and even the people of the city who dress in similar colors as his palette.

Most of the pieces in the exhibit were quite large with the majority of the work in black and white.  Coming from a licensing, illustration, design background I was struck by the decorative appeal his work would have for the hip, corporate culture.  The artist often uses off-the-shelf imagery and adds glitches that create interest and celebrate human error.  This piece is from the Estee Lauder Companies Inc., New York and I can just imagine it hanging at their headquarters.

A close inspection of Wool’s work reveals a dot pattern that is created by reproducing his previous pieces and using the duplicates for a starting point.  Imperfections become the inspiration for creating new imagery.

Yellow!  Although Wool’s art is predominantly white or black when there is a burst of color it stands out like an exclamation point.

One of the highlights at the Guggenheim was the Robert Motherwell:  Early Collages exhibit.  As you enter the exhibit space there’s a large of photo of Motherwell as a young man working in his studio dressed up in a tie and shirt.  Several of the collages feature torn kraft paper, sand mixed in paint and droplets of glue.  The materials are so childlike and basic but the results are profound.  The almost sixty pieces are masterful in the use of color, composition and textures.   The Guggenheim has published a catalog of the exhibit that is not to be missed. 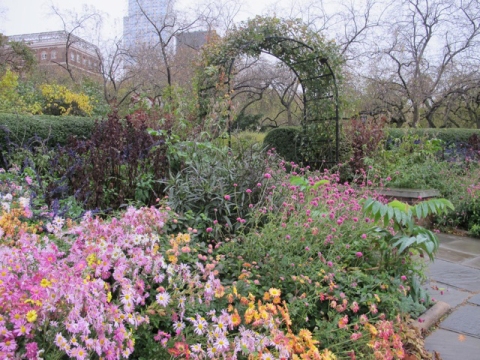 The Conservatory Gardens in Central Park on Fifth Avenue between 104 and 105th Streets is the perfect spot to escape from the hustle and bustle of the city.  It has beauty no matter what time of year you visit-a work of art that never stops evolving.  On this particular day it was snowing for the first time this fall.

One more art stop before leaving the Manhattan was at the Jewish Museum to see the Chagall: Love, War, and Exile exhibit.  Many paintings and works on paper are included that Chagall created from the 1930s, during the rise of fascism, up until 1948 when the artist lived in Paris and then in exile in New York.   These deeply personal pieces depict Chagall’s response to war and loss through color and symbolism.   There is a museum catalog that was published for this exhibit. 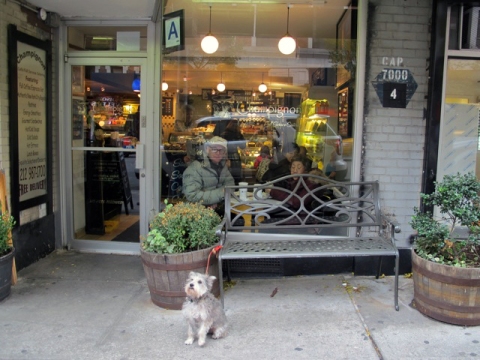 Champignon Cafe at 1389 Madison Avenue, between 96th and 97th Streets, is one of my favorite neighborhood places to relax and have a casual breakfast or lunch.  Mushroom focaccia and a cappuccino…

If you live in New York or only have a small window of time to visit-this was the perfect itinerary for artistic inspiration.  All of the exhibits were worth the effort and we enjoyed every single minute.  bye bye New York…

You are currently browsing entries tagged with Chagall at donna ingemanson studio.