Frida Kahlo at The Dali Museum in St. Petersburg, Florida is an inspirational exhibit that spans the life of one of the most celebrated artists of the 20th century.  With a selection of 15 paintings, seven drawings, several personal photographs including a biographical video that depicts the life and times of the artist that explains the circumstances of Frida’s life that contributed to her artistic expressions. 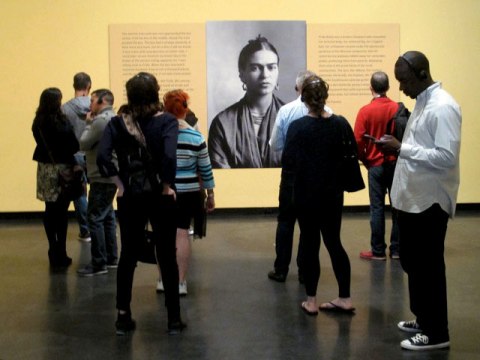 The exhibit is designed as a timeline of the artist’s life.  The arrangement of paintings, drawings and photographs starting with her devastating bus accident in 1925 when she was 18 that haunted Frida with pain for the rest of her life, meeting Diego Rivera who caused her much psychological agony along with her personal conflicts that are depicted thru her artwork.

This early painting of Alicia Galant was a friend of the family who lived nearby in Coyoacán is beautiful with a velvety quality to the paint application.  Frida’s mother bought her paints while she was convalescing from her bus accident and she started to create portraits of people that she knew.  This portrait painting was signed on the back:  “My first work of art, Frida Kahlo 1927.”

Frida was a muse for an assortment of well known photographers throughout her lifetime including her father, Guillermo Kahlo.  There are several photographs and videos sprinkled throughout the the exhibit.

This photograph reveals an uninhibited Frida posing for the photographer.  Later on I discovered this image had been cropped from the original to disclose less of her nude figure.

There are several pages from Frida’s sketchbooks on display that reveal the spontaneity of her creative process. 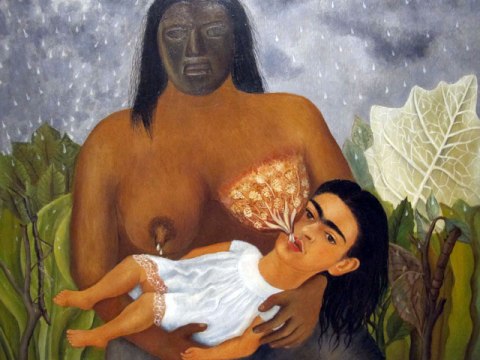 ‘My Nurse and I’ on canvas, 1937 depicts the memory when Frida’s younger sister Cristina was born and Frida was put under the care of a wet nurse who was an indigenous woman. In this painting the wet nurse has a blank expression of a pre-Colombian mask while Frida has the head of an adult and body of a child.  Frida’s artwork takes on this type of symbolism after her miscarriage while living in Detroit with her husband Diego while he is working on a large mural commission.  Her boldness in confronting her life struggles are astounding when seeing her artwork that’s revealing with a very personal and raw perspective.  As Frida continued to paint it seemed like the medium was like writing for her, as the primitive symbolism evolved, technically her painting style remained consistent throughout her artistic journey.

It’s so rare to be able to enjoy an art exhibit dedicated wholly to this inspiring artist that I recommend going out of your way to visit this show.  The Frida Kahlo exhibit is currently at The Dali Museum in St. Petersburg, FL thru April 17, 2017.

You are currently reading Frida @ the Dali at donna ingemanson studio.