There are only a few days left to visit the Nick Edmonds exhibit at the Thayer Gallery in Braintree, MA which runs thru November 14, 2014.  Edmonds is an award winning sculptor who has taught at the School of the Museum of Fine Arts, Milton Academy and Boston University where he is currently a Professor Emeritus. 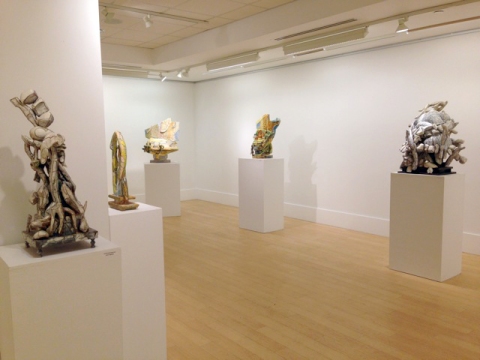 This exhibits features several pieces by the artist that depict his fertile imagination and technical skills.  Each piece is unique and yet has a stylized appearance that distinguishes them as a Nick Edmonds’ creation.

The sculptures are large and create abstract forms and on closer observation reveal carved and painted details of imaginary worlds.

Edmonds’ monumental sculptures are inspired by Japanese gardens and the idea of creating a wholeness of nature that can exist indoors.  This inspirational show is beautifully arranged and curated by gallery director Karen Koskores.  Visit the Thayer Gallery on the campus of Thayer Academy which features a diversity of artists and art mediums on the the South Shore of Massachusetts at 745 Washington Street Braintree, MA 02184.

You are currently reading Nick Edmonds at Thayer Gallery at donna ingemanson studio.